Bhojpuri superstar Khesari Lal is not just a superstar for name, there is no shortage in his wealth and fame. Recently, he was seen wearing gold in an event, he was wearing a lot of gold jewellery. Together they wore a black sunglasses black hat and a white shirt.
This is not the first time he has been seen wearing so many gold chains that he is often seen in a lot of gold chains which are quite expensive.

Bhojpuri superstar Khesari Lal Yadav has worked in many hit films such as Mehndi Laga Ke Rakhna. Not only this, his upcoming film is also on the verge of being a huge hit, named Baaghi Ek Yoddha.
Recently, he also appeared in Bigg Boss show, which has made his identity across the country. Although he could not progress much further in this show, yet his calm nature was well liked by the people. Recently his song Seeten Kaare Lo was a huge hit and had reached the trending number 3 of YouTube.

He has earned a lot of name in the Bhojpuri industry and it is nothing to hide from anyone that his fees will also be very high. 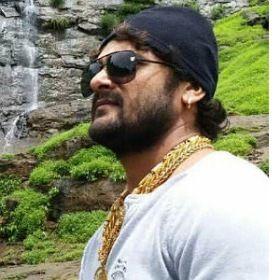 According to the recently released report, it is known that Khesari Lal is one of the highest paid stars of Bhojpuri. He takes one to one and a half lakh rupees to do a 3 hour show.

Movies Of Khesari Lal That Made Him Star

Here are some of the movies of Khesari Lal that made him a superstar.

Khesari had also appeared in the studio some time ago wearing a series of gold chains. Khesari Lal, who has a gold body, wears a lot of gold chains not only in personal life but also in films.
He is fond of wearing gold due to which he Khesari Lal is also known as Goldman.
Khesari Lal himself tells that he has been caught many times in the affair of his gold buying hobby. He says that many times he did not have money, yet he was so fond of buying gold that he used to buy gold from the remaining money and then he had to hear a lot from his family.

If wealth and fame is so much now, even hobbies will be high. As the pictures show, Khesari Lal is very fond of wearing gold chains, many times the controversy arose in the Bhojpuri industry due to his gold chain, but still Khesari Lal Yadav did not stop wearing the gold chain. Many times he has told himself or how much he loves the gold chain and he keeps buying new gold chains of different designs.